The big moment finally happened. My little guy had his first pony ride this past weekend and absolutely LOVED it. 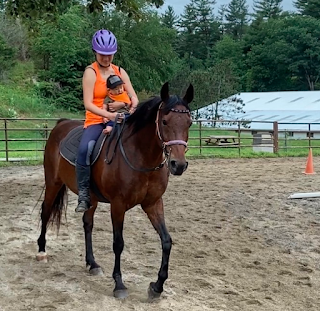 As much as I wanted to instantly throw my kid on top of my horse and hit the trails, I made myself wait until Caleb proved he had good core and head control. When I noticed he was hitting the big developmental milestones- being able to sit up unassisted for as long as he wanted to and could completely roll over, I took that for a green light.

But obviously, nothing bad happened. Everyone was all smiles the entire time and Caleb would pet Quest's mane and withers whenever he could reach. Mareface was a complete saint in the outdoor arena and never put a single foot out of line. I was so happy to share my love of horses and riding with my kid. Hopefully this bodes well for future horse adventures as a family.

DIY Half Pad Cover with Shims

Ever since I did my first 25mi CTR catch ride in a borrowed treeless saddle years ago, I instantly became a huge fan and immediately got one for my distance tack setup. From the start, I've been using a Supracor saddle pad along with it my treeless saddle with zero issues. In fact, I have always gotten perfect sweat marks and never a sore back on every horse I've used my treeless saddle + Supracor pad combo with.

However I recently heard the pads weren't exactly ideal for treeless riding over time or longer distances (anything longer than 35mi/LD) due to gradual pad structural breakdown with repeated compression. To be honest, I haven't seen any issues occur after the hundreds of trail miles I put in but it felt prudent to maybe try and prevent possible issues from becoming bigger problems in the future.

I was definitely pretty gutted though since I love how easy the Supracor pad was to clean (just rinse and hang dry) and as a first-time mom with a 5mo boy, anything that can save me hours of scrubbing and cleaning is a huge win in my books. Determined to prolong the use of my pads, I started doing my research in all the endurance and trail riding groups and to my immense relief, a lot of seasoned riders provided a similar suggestion that had worked successfully for them- using a Skito Equalizer Half Pad under the saddle to provide extra spine clearance.

Unfortunately after doing some digging, the half pad was providing to be very elusive to find and it was no longer being made by the company. After getting some photos of the product, it definitely looked like something that I could try my hand making though!

For materials, the only thing I really needed to buy was some canvas fabric. I had all the other materials on hand already from previous projects.

I created the cover pattern using a Skito shim I had and made sure to include a seam allowance and ample room on the side were the Velcro would be sewn in. I made four separate panels using the same template and sewed them all together edge to edge creating a "pocket" with an opening that would be sealed together by the Velcro. 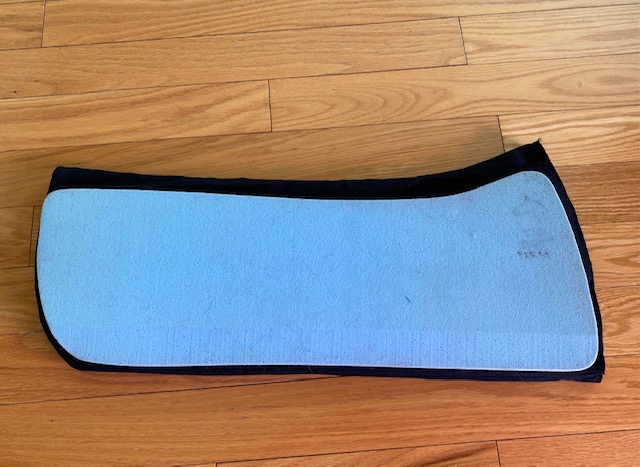 The final step was sewing the spine with the cover right side out to separate the two shim pockets and keep them from sliding from side to side. With that done, I checked the fit against my Supracor pad and it came out pretty nice! 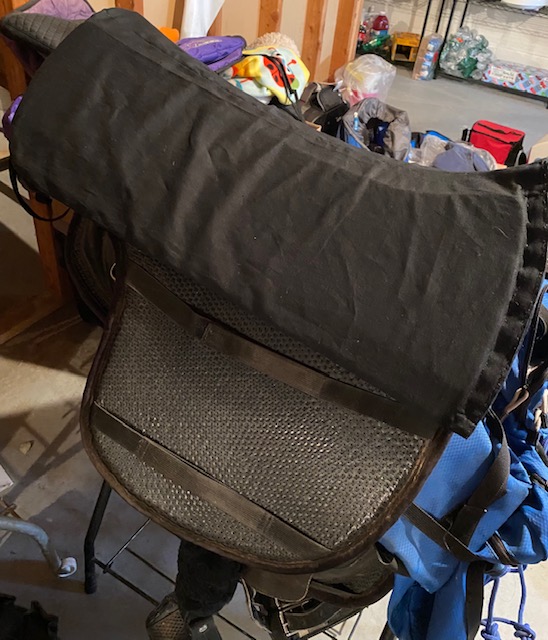 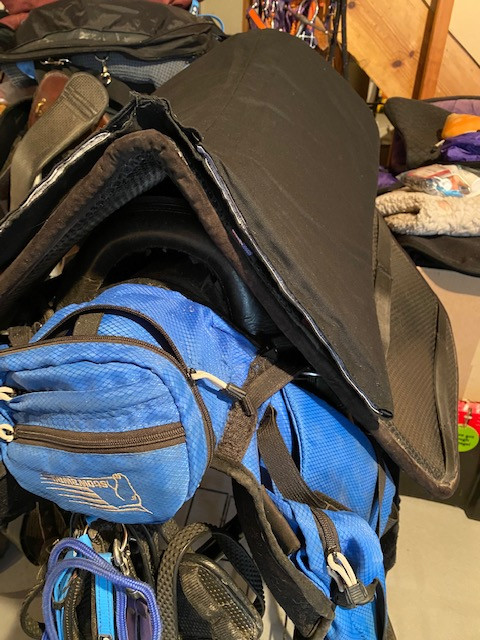 I'm planning to give the half pad a test ride with Quest the next time I'm out at the barn and will update with how things go. Hopefully everything works out and I can continue to enjoy using my Supracor pad for many more long distance miles.
Posted by Grace C at 11:25 AM 3 comments: 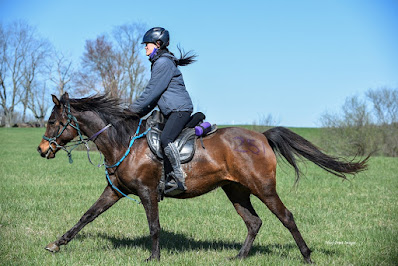 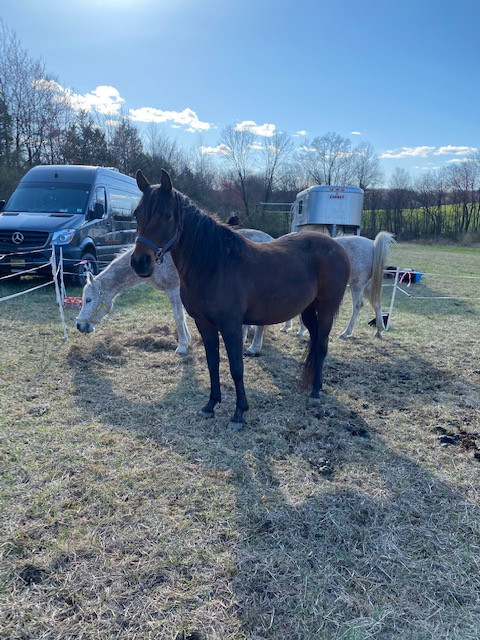 This past weekend, I finally got to dip my toes in endurance riding after many, many years of trying to get started in the sport.

Those who have been reading along for awhile may remember that I boarded at an endurance barn about 5 years ago with the intention of getting Quest and me going in the discipline. Unfortunately an injury sidelined us and put a temporary pause to those competitive dreams. The downtime in between was not wasted though. I did a lot of catch riding and trail ride-alongs with different endurance folks across the US from Texas to California. In my travels, I got hands-on exposure to the usual things like conditioning schedules, tack setups, elyting protocols, hydration but also most importantly, I began to really think and piece together what I valued and wanted from the sport because....it is frankly quite expensive and so much goes into even just getting to the ride, let alone completing and finishing in Top 10 or best condition.

At the end, after all the thinking and despite the numerous heartbreaking setbacks, my determination to give endurance an honest try never waned. My goal is still competing with Quest or another future mount but I recently was given an opportunity to partner up with a little Arabian mare named River for the Foxcatcher Endurance ride and jumped at the chance.

The week before the ride, my husband and I had a tall order of packing for the trip- not just my tack, but also everything we needed for an overnight stay away from home with Caleb. I did wonder how my little guy would do on the road trip and if this experience would bode badly for future family adventures. However I'm happy to say my little boy was so well-behaved and only badly fussed when he really needed something (namely his meals).
Foxcatcher is held at Fair Hill NRMA, which is the same location for the Chesapeake CTRs that I did a catch-ride years ago. It was really nice to revisit the trails again after so much time away. The weather was forecasted to be bright and clear but early morning at the start was wind swept and frigid. I was glad we had hotel accommodations for the night before so that my husband and son had a place to stay out of the cold until the day warmed up.
I was instructed by River's owner to ride with two of her other horses and to stay together as a group. Asides from our group helping a rider catch her loose horse on trail within 1 minute of the ride start, the first 15 mile loop was uneventful. At the hold, River vetted through fine though had some bad groundwork attitude issues. We were watered, fed, elyted, tack and ready to go in time after the 45 minute hold. Unfortunately the two other horses in our little group with were pulled at vet check so River and I had to ride with a different rider group. Then one of the horses in that new group was dealing with some cold cramp lameness, it eventually resolved with no lasting problems thankfully. When we finally left camp with the group for the second loop, it was nearly 30-45 minutes later than the time on our card allowed, setting back our pace for the last 10 miles. 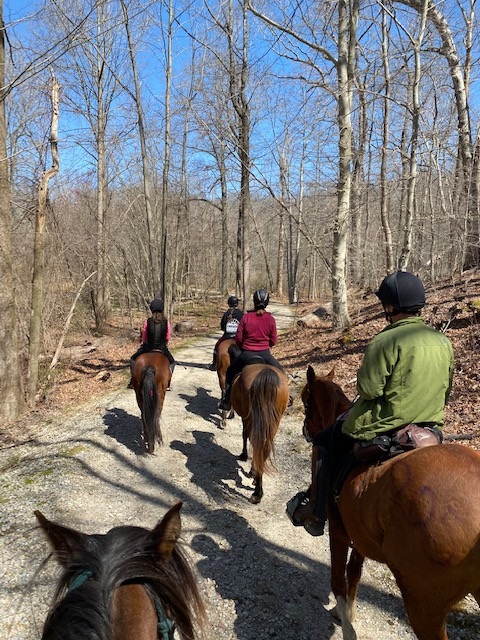 River was game to go and we could have easily separated from the pack and moved out on our own to finish within ride time but I had to adhere to the owner's instructions. As a result while River and I technically "completed" the ride, we ended up finishing overtime. It was a bit of a bummer but I had a healthy, sassy horse and did my first ever 25 mile endurance ride 5 months post- pregnancy...not too shabby!
With so many variables and the pandemic still on-going, I'm honestly not sure what the rest of the endurance season this year will look like but I'm going focus on the positive and stay grateful for each ride opportunity as they come and the chance to gain experience for bringing my own horse along for the adventure someday. Here's hopefully to many more competitive miles ahead in 2021!
Posted by Grace C at 11:59 AM 4 comments:

Email ThisBlogThis!Share to TwitterShare to FacebookShare to Pinterest
Labels: endurance, family, food for thought, other horses

My fellow horse-loving friends....it's finally happening, one way or another. I can't wait to share the finer details with you all soon!