First Time For Everything

It took five years but it finally happened...I had my first real "oops, rider overboard" fall off of Quest. We're both fine and but it was like ugh whyyyy, especially given how it happened but I guess it was about time. I was probably way overdue for a first riding fall lol 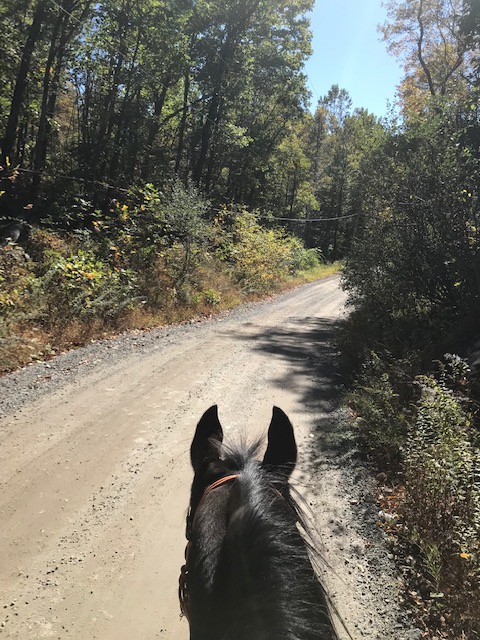 Fellow trail rider J had texted me earlier in the week about doing a long group trail ride out to the deli and I immediately signed on. Quest and I ride alone so much that more exposure to riding in a group is always welcome- any opportunity to train the marebrain is a resounding yes in my book. W and I organized a large group of our friends (it ended up being about 20 people!) to go apple picking later in the afternoon though so I gave J a heads up that I'd be keeping a strict eye on the time and Quest and I would turn around for home solo when we needed to.

W came out to the barn with me and was kind enough to help continue working on the trailer while I got to enjoy riding my horse in daylight. I gave him instructions on what to do for the day, a thank you kiss in appreciation, and trundled off across the farm to fetch my horse from her pasture and tack up. 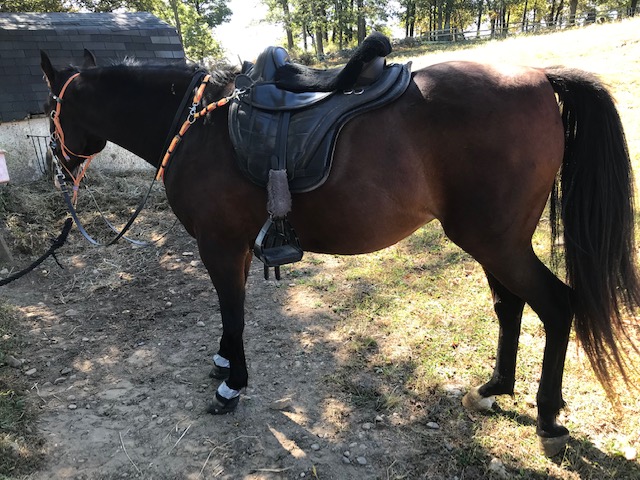 The farrier had come out the day before so thankfully I was working with a very fresh trim when putting on the boots. The front shoes were nice for their ease of use and Quest does okay in them but I could tell she was never 100% happy in them as she was in boots. So off the shoes came and we're back to barefoot all around.

During my trip to CA, I learned from the endurance rider I rode with to use duct tape to reinforce the velcro straps that die out way faster than the boot treads themselves. Using the tape, the Gloves stayed on perfectly for our entire w/t/c ride over all the diverse terrain we have here.

After tacking up, we met up with our trail ride group. We have ridden out with J and her little POA mare Lucy a few times and our girls get along very well. Unfortunately Quest had issue with K and her gelding, a sturdy chestnut mustang named Tonka. K was kind enough to give us room when I mentioned that Quest had angry marefaces at her horse whenever Tonka drifted too close. We  made sure to keep them apart and everyone did fine after that. 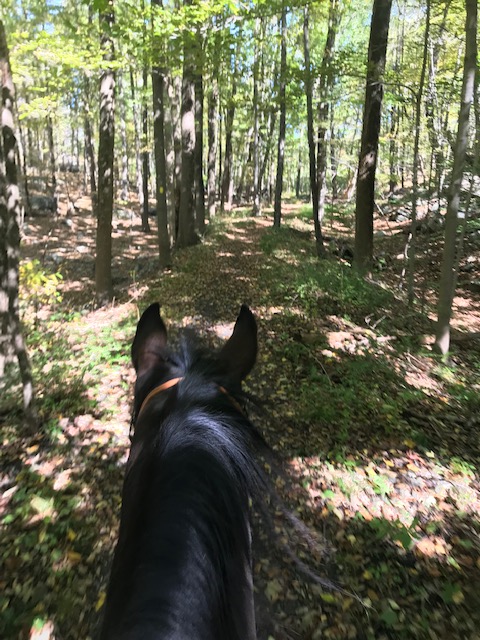 We set off at a good walking pace with Lucy and Quest trading the lead. In previous group outings, I noticed that Quest has a tendency to tune me out and go with whatever the other horses are doing which is not always a good thing. So this ride I made a point to not fall asleep at the wheel and to keep mareface actively engaged and checked in with me by having her move her feet exactly where I wanted her to go.

Things were going really well and we were making excellent time on the trail trotting areas where we could and walking where the footing got too gnarly to move out. Lucy took the lead on the single track areas and Quest was definitely game to move out but still listened to me politely. As much as I would have loved to continue on with the ride, the time was drawing closer for Quest and me to turn back for home.

Being familiar with the area, I knew that the route would open up to the roadway after the last section of trail we were on and the plan was for us to use the trail split as the turn around point. Just one more section and we would part ways for home.

It had been awhile since Quest and I had done a long ride so there were a ton of new obstacles along the trail such as downed trees and brush all which we navigated successfully earlier in the ride and have done so before. So when we came across yet another fallen tree, it should have been no big deal. The trunk was quite wide but it was traverse-able. J and Lucy, who both love to jump, cleared it with no problems. Quest and I do not regularly jump nor did I have any desire to attempt any heroics on the trail so I had Quest to settle into a calm walk to quietly step over it.

Instead she paused and with a massive lurch, heaved herself bodily over the trunk.

We made it over, but I was completely taken by surprise and ate dirt, landing on my side and back. I somehow manged to hold onto the reins though. To her credit, Quest immediately stopped and stood still, waiting for me to get back to my feet. Quick check: Quest was fine, I was fine- thankfully I had landed in the dirt and leaves next to the trail, somehow avoiding the rocks, and nothing was out of place. 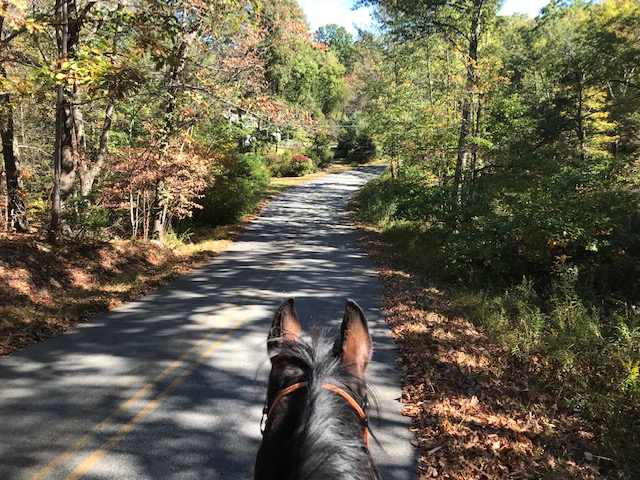 After reassuring J and K that I was okay, I mounted back up and we headed down the trail together for a moment until I realized that we had to double back for my FitBit which had fallen off. After recovering it exactly where we thought it had landed, it was definitely time for Quest and me to head home to the barn. K offered to ride with me to make sure I got back okay but I thanked her and sent them off, not wanting to ruin their ride plans that day.

To my immense surprise, Quest didn't scream or worry a single moment on our solo ride back home, if anything she relaxed more and was completely compliant to every request I made. We walked, we trotted, we cantered in beautiful autumn weather- enjoying our time together.

Despite the tumble, I was thankful that I wasn't badly hurt and Quest was no worse for the wear. I was pretty sore later that evening and the day afterwards but that's pretty much the extent of it. One of my friends is a PA and she regularly asks me how Quest is doing, I saw her the day afterwards while grabbing a group lunch together and she reassured my husband (who was still fretting) that I was fine/she would have had no idea what had happened if I had not finally told her.

Things happen, sometimes all we can do is get right back into the saddle and ride on.
Posted by Grace C at 10:27 AM 9 comments: