The weather in my area has been unseasonably mild the past couple weeks and thus far, we have been spared our annual dose of snow. The latter means that the trails have been clean and clear of the usual seasonal hazards and prime for some good riding! 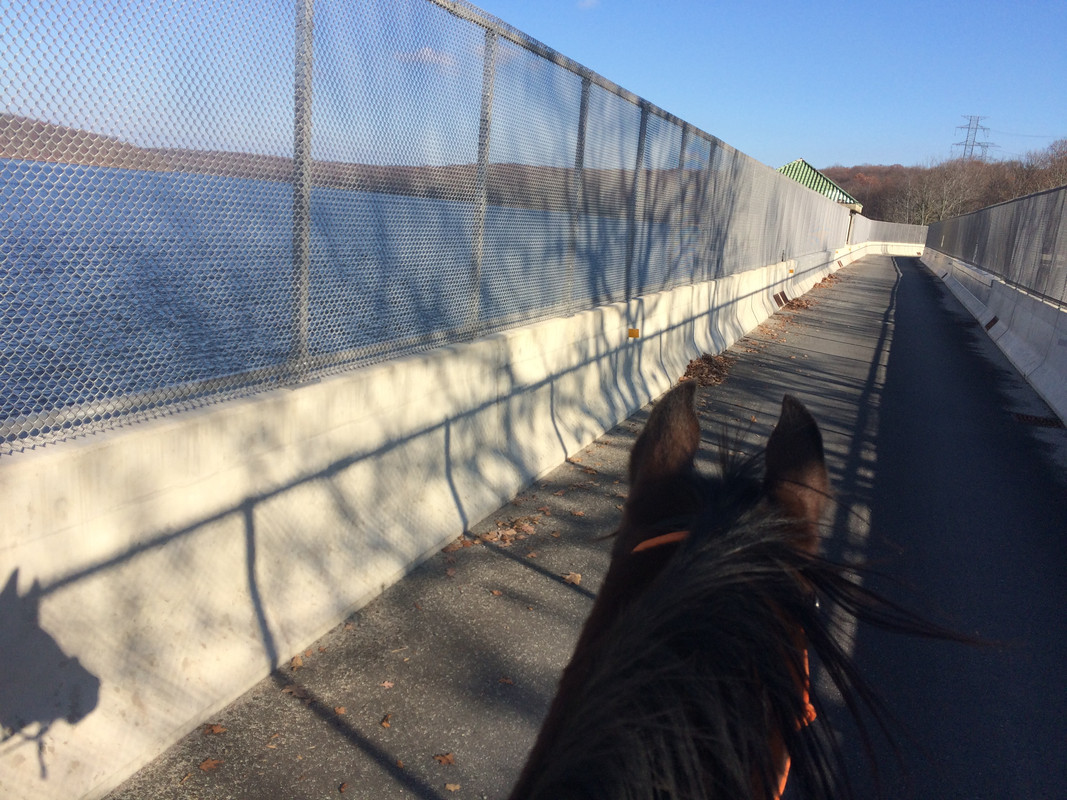 This past weekend Quest and I  led A and Mel on their first trail outing at the barn. A few minutes out, we walked by a section of trail I mentally dubbed the “junk yard” because of the random trash we always see dumped there- from empty buckets, plastic trash bags to rusting mini fridges. It makes me angry to see litter and I know for a fact that it also bothers other people because I’ve seen some of the junk “magically” disappear…only for more stuff to take its place. Ugh. I’m planning to make and post no littering sign. Not sure how effective that would be but it may somewhat deter the usual suspects.

For the most part, Quest could care less about the junk but sometimes the objects on the side of the trail were odd enough that they caused the sideways eye and snorting and sometimes even a full stop. On this particular day the new item was a shiny pleather 2-seater couch that was tossed end over end, laying on its side.

I felt Quest wanting to stop and told her to keep walking forward past it. She kept moving, giving it as much berth as possible though. The entire time I kept her facing the obstacle and used my “outside” leg to gradually move her a little closer to it.  Once past it, I rewarded her with a “Good girl” and a quiet pat and we walked on.

A, who was riding behind me, said“Don’t worry, that also made Mel look.” Her comment made me wonder how different people would view and handle a horse's reaction to something spooky. IMO, of all the spooks a horse could possibly have, giving something a look is highly preferable to the huge number of other reactions possible…e.g.; drop shoulder, spin, bolt. Of course ideally, we all want a bombproof horse/unicorn that doesn’t spook ever at all but we are interacting with flight instinct animals.

For me, I am okay with my horse expressing her concern/curiosity in a safe way by looking but when I say “Okay, I see it too and it’s fine- keep moving”, I want us to keep moving. Depending on what/where the object is and how she is that day, we might stop and do the “touch it” thing but lingering at stuff sometimes causes more angst for Quest. The whole, move along-nothing scary here mentality usually works best for her.

The rest of the ride, for us at least, was rather uneventful. It was mareface’s second time on those trails, she was just as game as the first time and led the entire way. We did short little trot stretches where the trail was flat and clear and Quest clearly enjoyed moving out. She was feeling really good and I couldn’t help smiling to myself. 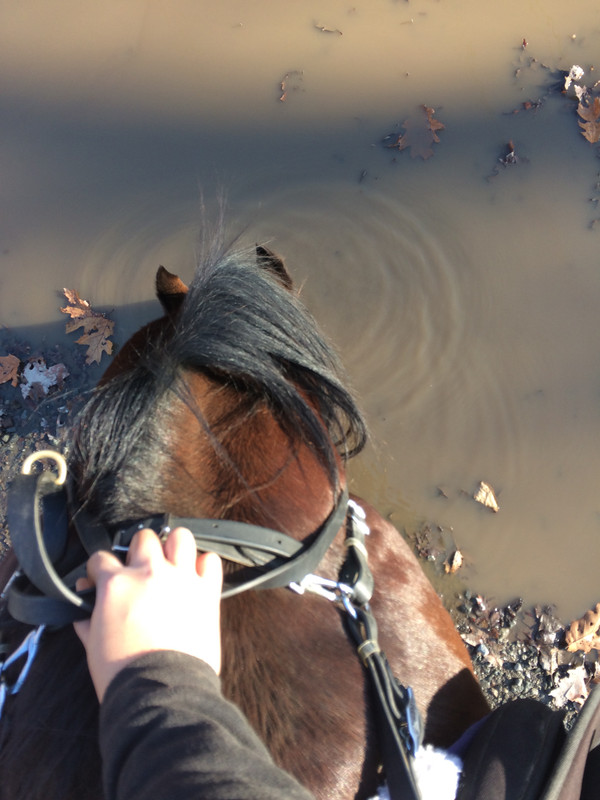 When we got back to the barn, I untacked and let her soak up the sun for as long as possible before putting her blanket back on.  Of course mareface took this opportunity to go for thorough dirt mud roll  (she even rolled uphill, I couldn't help but be impressed) so I had to brush her out again before re-blanketing when I left the barn. I felt a little bad because the weather was so nice but the ridge gets windy at night and then it POURED buckets of rain and sleet the next two days.

Last night I went to the barn to get a rehab ride in. Midweek nights are typically busy at the barn since the in-house trainer uses those as lesson days for his adult students. The indoor arena is a decent size but it does feel too crowded with more than 5 horses. Fortunately for me it was a non-lesson night and there was at most 2-3 others in the ring at one time and we all did our own thing. I got Quest cleaned up- she was covered in mud thanks to all the rain – and tacked her up in the bareback pad. We warmed up at a walk and started doing our trot sets. She was feeling really good so I cut the trot short and decided what the heck, let’s do a little canter. And off we went.

It was our first canter in almost a year and it made me realize how I much I missed riding my mare <3 It’s been awhile for both of us so it wasn’t 100% pretty I’m sure but we managed. Her left departs were great, the right we had to do a couple times until we got it clean though that is likely more my issue (lopsided back muscles due to mild scoliosis) than hers.

Quest has been blasting around in pasture on her own for months but we are now cantering again undersaddle. Hopefully this means we are entering the last phase of mareface's rehab and though it took a long time, I think taking a super conservative route has paid off well in our case. Fingers crossed we’ll be back to unlimited work in a month or so, in time for spring trail adventures!
Posted by Grace C at 12:11 PM 10 comments:

Wow, January is a little more than half-way over and this is my first post of the year haha A lot has been going on since then though so you'll have to bare with me as I do a recap of sorts. I do hope you all have been getting some riding in despite the cold/snow/whatever inclement weather you have your respective region. 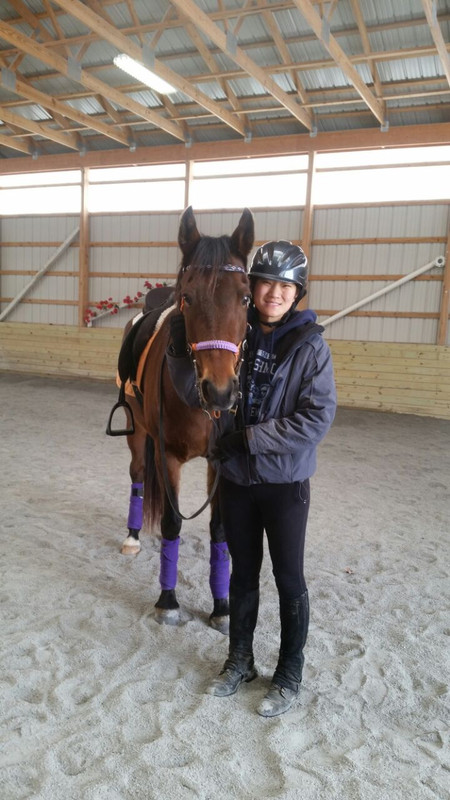 During the holidays, I was shuttered indoors with family most of the time but I did manage to sneak in some saddle time here and there. The Friday before NYE day, I met J at the barn to do a long trail ride and have her show me more new trails. Unfortunately about 10-15 minutes into the ride, we discovered that the gravel road accessing the trail head was completely frozen over and encased under a solid sheet of ice. I convinced J it was not worth risking injury and we turned around, carefully making our way back to the barn. A few vehicles passed us while we were navigating around the ice and my anxiety level immediately shot straight up...all I could picture in my mind was 5000lbs of metal crashing into my horse and me. Fortunately no such thing happened.

In stark contrast to the dirt roads, paved asphalt in my area of NJ is typically salted within an inch of its life during the winter and the roads were sparkling clean and ice-free. Itching to trail ride, J and I decided to go for a walk. When I half-leased Rori about 3 years ago, I had pre-emptively scouted out more places to take her to ride and stumbled upon a trailhead access point that was located on the side of a road and had always wanted to check it out. I did attempt to try the route once with Rori but she had zero interest and we didn't get far without an argument every single step away from the barn. It really wasn't enjoyable or fun for either of us so I didn't try too hard with her.

Quest, on the other hand, was totally game for an adventure and led the way as we walked through residential neighborhoods with J and Lucy. It was a quiet Friday morning with little to no road traffic (both mares were totally fine with vehicles passing them when there was traffic) so we took our time meandering along and stopping at our leisure along the way to explore potential locations for more trails.

We eventually reached the trailhead access and I was FINALLY able to "connect" the trails together after 3 years of wondering. The rest of the ride went without a hitch and both mares seemed to enjoyed themselves as well.

On NYE, A and I had a mutual friend's party to attend later in the afternoon so we did a quick arena ride. We got festive and dressed the ponies with polo wraps in their respective colors. I gifted A with the teal set for Christmas this past year. My friend M at KBTC gave me a set of purple two years ago and I had not yet tried them on Quest. She looked super cute though! 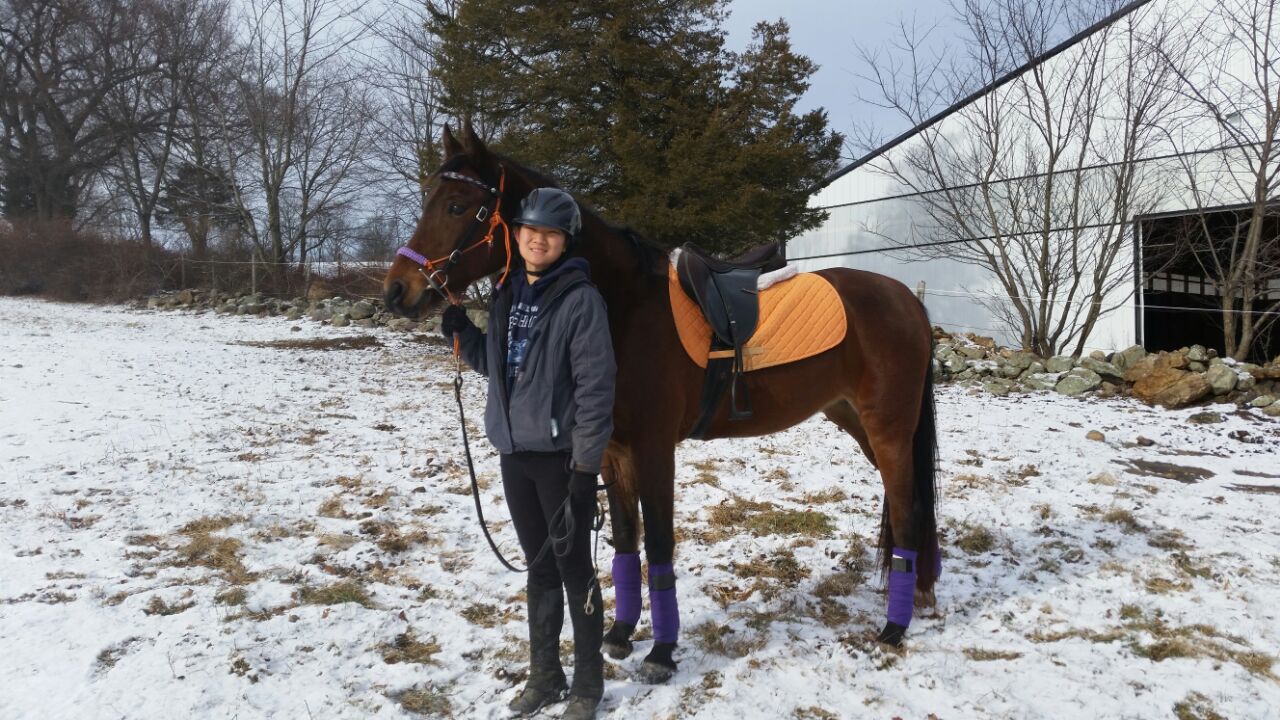 The weekend after snow was on the forecast but I wanted to fit in a trail ride before the weather got bad. I got Quest tacked up and we set out solo. The snow began falling about 10 minutes into the ride. Despite bundling up, I was still freezing but it was a ride nothing short of magical. We were lone observers in a quickly changing landscape of gray into white surrounded by the dreamlike lull of falling flakes.

I managed to hold out for almost an hour 30 minutes before it was just too cold to stay out any longer. I spent nearly as long thawing out afterward. My core and legs are fine but my hands and feet still get chilled. I have gloves and bought some wool socks a couple months ago and have been wearing them for colder temp rides but my feet still get cold. Maybe I need some fancy winter riding boots...On the other hand, mareface was fine the whole time and was all warm and snug in her blanket at the end of our adventure.

Yesterday I took a day off work to recoup from a cold I caught the past week while traveling on business. I was stuffy but not feverish AKA "still okay to go to the barn". I told myself it was because I had to deworm Quest (the boarders are responsible for administering at OF, staff does it for a fee if you don't get to it in time), I even wore jeans and sneakers to try and dissuade myself from riding...But the warmer (34 degree) weather beckoned me to hop on. I kept it simple and intended to only do a bareback arena rehab session ride. Of course seeing the bright sunlight made me want to venture outside, so then we hit the trails for a walk.

All in all, a handful of good rides were had over the few weeks despite the weather and my health attempting to thwart the best laid plans. While I might have a FB reputation to uphold as the insane person that rides in every weather, I'm certainly looking forward to saying good riddance to winter!
Posted by Grace C at 11:56 AM 13 comments: