The Spice of Life

While I consider myself pretty new to the distance riding sport, I think have read and seen enough to conclude that the endurance riding terrain in the NE is rather diverse...sugar sand, open fields, rock ledges, large gravel, sustained hill climbs, hard pavement. You name it, our rides probably have it in some form or fashion. 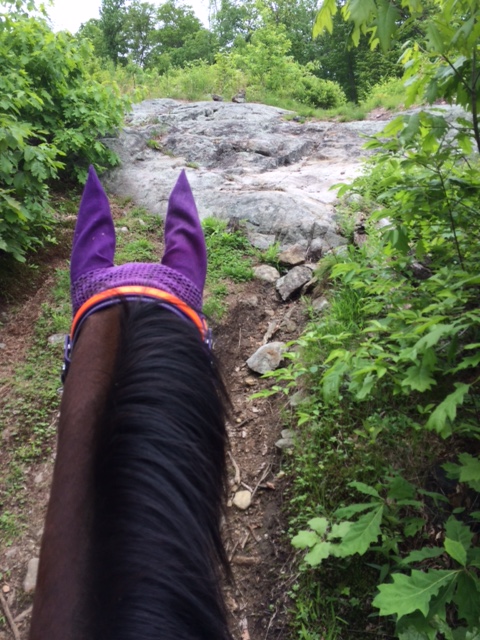 As some might have noticed, I have been making a point to check out new places to ride from the barn each time I hit the trails with Quest. Asides from exploring our new-to-us home, the end goal from the beginning was to build up a "library" of trail terrain types for conditioning dependent on the ride we want to attend in the future. And while I now do have the option to haul out for conditioning (and plan on that when the ride date gets closer), if I can do most of my riding right from home that is always infinitely all the better for my time and wallet.

As with any any sport, you should train in what you will compete in.  Thanks to trail adventures during 4-5 months of leasing Rori, I already knew OF had direct access to trails but I didn't know if it was enough and what they had for terrain type. Fortunately the first part has been resoundingly answered- we've got miles upon miles and still more to explore. The second though has been more difficult to resolve.

From our explorations so far, I can safely assume we have a LOT of the rock variety. With the amount we have at home I think we might have OD in the pocket.

As a result of tackling tough terrain like this almost every time we go out, Quest has actually gotten quite good at carefully picking out her path while moving swiftly down the trail. However the obvious huge downside is we need the complete opposite- flat level footing that allows us to really move out. And sure, it is entirely possible to condition by doing endless laps in an arena or pasture but that can only get you so far before both horse and rider brain are totally fried...as evidenced here by yours truly.

As a temporary solution, I have been using gravel road hills (and booting appropriately) to clock in some cardio at speed but what I desperately missed were the flat, level rail and canal trails. This was the only kind of footing we had at WSS for training and it was great for slogging out quick fast miles in a short amount of time.

While surveying maps last week, I decided to take a closer look at a trail that had I always paid little attention to until now. I had passed the entrance numerous times and when I asked JA about it, she had dismissed it as not really worth riding. Being ever curious and determined, I still wondered about it though so we finally gave it a shot this weekend.

My curiosity was duly rewarded.


The trail is broken up with gravel patches so we had slow to a walk and it's a little less than 2 miles, so about 4 miles for a there-and-back. I'm not complaining though since I can easily boot Quest all around and we do multiple loops here for sustained trots and round out our rocky trail outings with some some flat speed. Now all we need are some wide open fields!
Posted by Grace C at 1:48 PM 9 comments:

What was supposed to be my first off-property trailer adventure with Quest got completely drowned out by unending torrential rains this weekend. It was disappointing but we made the most of a dreary, cold, and wet situation by doing some desensitizing work in the indoor arena instead. 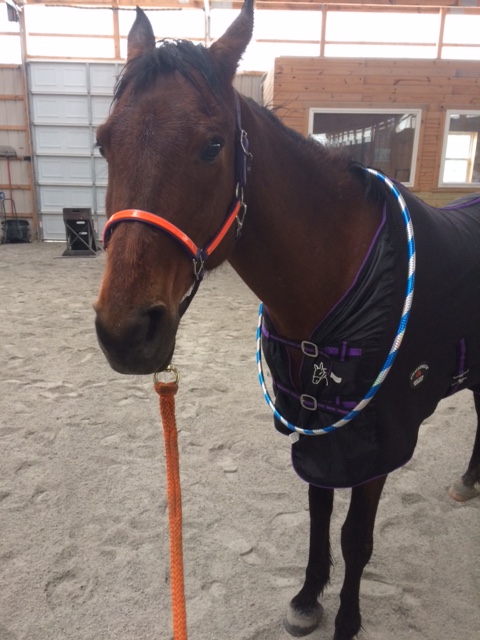 Before going to the barn, A and I stopped by the local dollar store to see what they had in stock and found LOTS of stuff to work with. There is much to be found and utilized if you look carefully and think creatively enough!

Unsurprisingly the barn was totally deserted when we pulled in. I admit it was pretty miserable walking through the pasture in the rain and I questioned my sanity for a moment. But the weather did effectively deter the usual weekend boarders from coming out so A and I had the entire indoor to ourselves the entire time we were there. Poor Quest was shivering from the cold rain and wind though so I immediately got the cooler on her once we were in the arena and set aside her rain sheet for later. While mareface dried off and warmed up, we started working our way through the new toys. 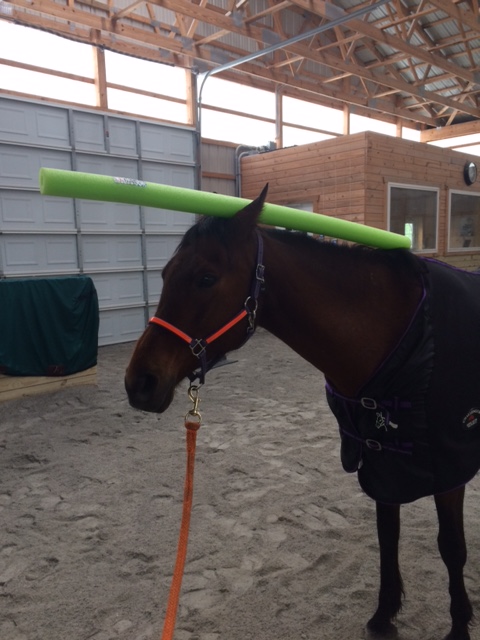 The umbrella was the first item up and it caused quite a bit of concern at first. Even just opening and closing it caused Quest to scoot away with snorting and nostrils flaring. She still wasn't 100% happy with it at the end but she was much more brave and stood quietly while I opened and closed it, twirled it around, and waved it above her head.

As I moved on to the other objects, it was really neat to observe how it took progressively less and less time for Quest to get over her initial concern. Her reactions at the very worse were to move her feet and evade the offending object but she eventually figured the game out. 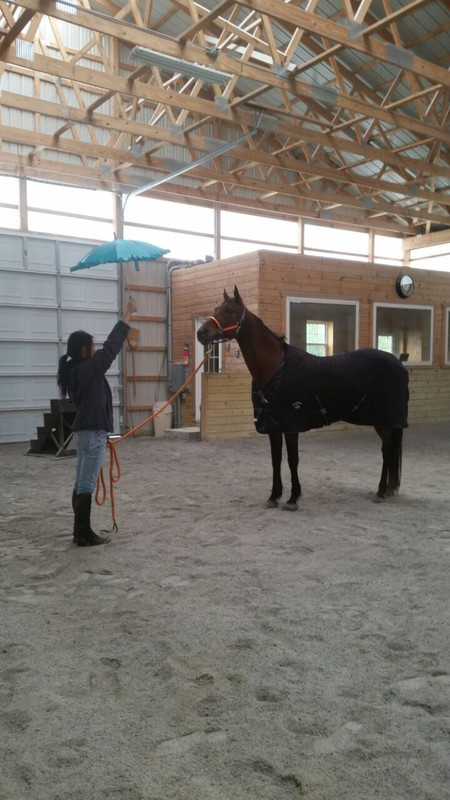 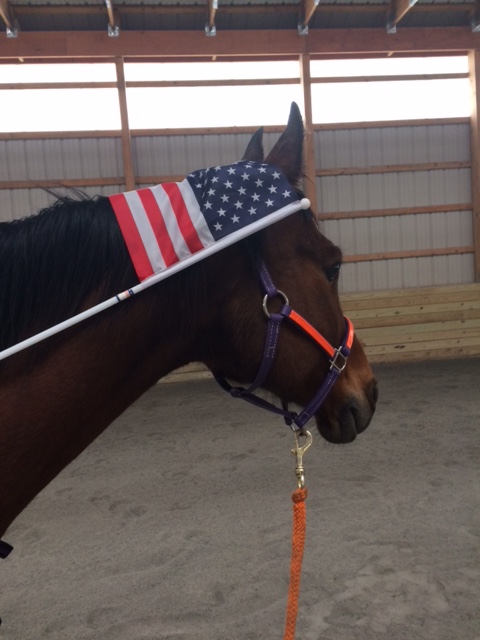 I tried to up the scare-factor as much as possible by doing things like draping and running the flag over her ears and eyes, bumping her between the legs with the pool noodles, etc. While my antics worked handily at first, Quest caught on and  soon quietly stood, resigned to her tortured fate.

Towards the end I could tell the marebrain and her attention were starting to fry- the bouncing inflatable beach ball and popping balloons finally did her in, so we called it a day. A and I let the horses go blow off some steam and get a cardio workout. For obvious reasons, it was the first time in awhile that I free lunged Quest. She was definitely feeling good though and looked happy for the chance to finally move out.

All in all, it was a nice break from riding to do something a little different, plus it's always beneficial to spend some time on the ground for things like this. And thank goodness for dollar store items that can be repurposed for horse-use too; no harm, no foul if something gets destroyed/trampled/stepped on.

Anyways fingers crossed we have better luck weather-wise in the upcoming weekends though and I actually manage to rent the truck (a different story for another time) so we can get out for some trails. If not, I think I found a few more locations to explore which could be used for actual distance training (e.g.; +15 miles). I am really hoping that is the case- it'd be great to be able to condition right from the barn and put the money saved towards attending more rides. One could dare to hope!
Posted by Grace C at 3:35 PM 10 comments:

From Day 1, Quest had never given me any issue with trailer loading. I still mostly have no idea what her 3-4 previous owners did with her but in the handful of times we have had to hit the road, I had deemed it safe to say trailers were NBD for her. Quest was always a model citizen and unquestioningly followed me into every trailer put in front of her, regardless of configuration. Step up, ramp load, 2 horse, 3 horse, straight load, slant load, first one on, last one on...She did it all without hesitation. 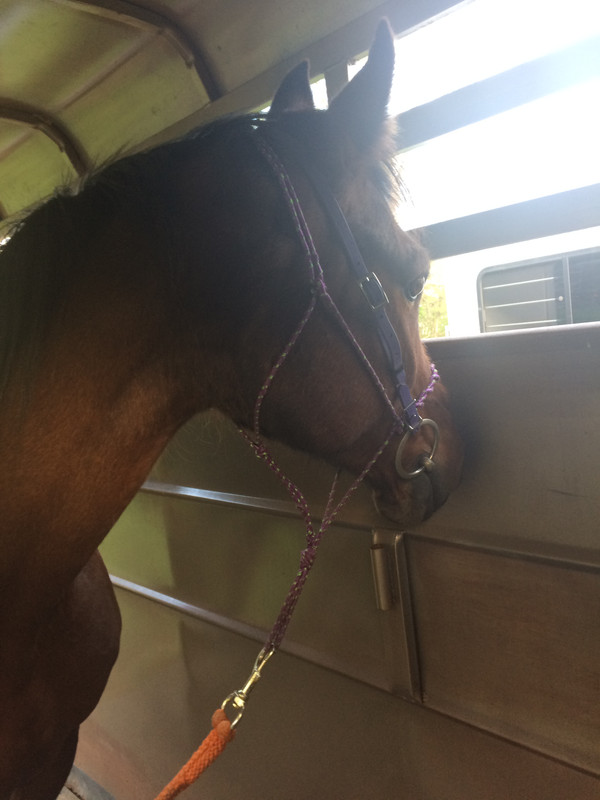 So when I bought my little stock trailer, I didn't think what I got specifically would matter all that much as long it was safe, solid, and tall enough. After all, a trailer is a trailer.

Well, the first time I tried loading Quest up on the trailer, she balked. She got two front feet on and and would not budge another step. I eventually got her completely loaded up in the end but we needed an extra hand to get it done. Her reaction totally surprised me though. This was first, and not a good one.

I immediately wondered if it was something having to do with the trailer itself but a quick mental run-down came up with nil. It wasn't too small (TB height), too dark (hello stock trailer), or unstable (floors and frame all good). Whatever it was though, this snafu did make me realize that I had to have the mareface pretty much as close to self-loading as possible since I'll more than likely be hauling out solo to train and attend rides. And to be honest, I didn't really want to haul off property if I couldn't get my horse consistently loaded every single time. IMO a trailhead or an endurance ride isn't exactly the best time or place for this kind of training.

So for the past couple weeks, we have been working on loading practice before our arena and trail rides. The first sessions were rough and progress was very slow since I had to first figure out what did NOT work for us. It really didn't help that Quest was surrounded by what essentially was an all-you-can-eat salad buffet; I spent most of the first sessions working on getting and keeping her attention on me. 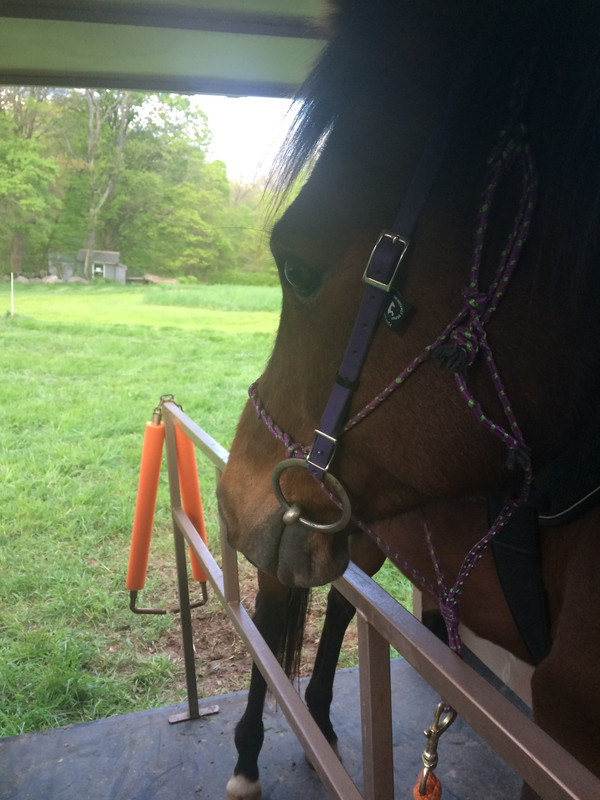 I also quickly found out she has never been taught how to self-load. As this was something completely new to both of us, it gave me a chance to observe how Quest processes and figured something out from start to finish. While she starts off doubting and trying to escape pressure very dramatically (in typical mareface fashion...le sigh), she has a ton of try and quickly gets the hang of something if I figure out MY job first. The latter was hardest for me since I had to try a ton of different methods before finally finding something that worked for both of us.

She questioned me hard at first but suddenly everything clicked into place. We solo loaded up about 5-6 times in a short 15 minutes earlier this week. And yesterday we finally did a real 100% self-load with no tricks or treats.

We did it twice again to make sure it wasn't a fluke, and it wasn't. It might seem silly to get this excited over something so small but I'm relieved we got this figured out. I admit I worried at first because not being able to solo load would have put a big wrench in our endurance plans and being independent. The fact that Quest can self-load is the cherry on top and putting in the time now to do it right will make it much easier and safer for all involved in the future. It was learning experience for both of us, especially for me. Next stop, off-property trail ride adventures!
Posted by Grace C at 9:49 AM 8 comments: