The endless days of awful cold, ice, and snow eased up if albeit momentarily this past weekend with highs in the low 50s. It seemed like everyone decided to come out of the woodwork; the indoor was super crowded with lessons and boarders riding so after warming up, Rori and I decided to venture out on our first solo trail ride. 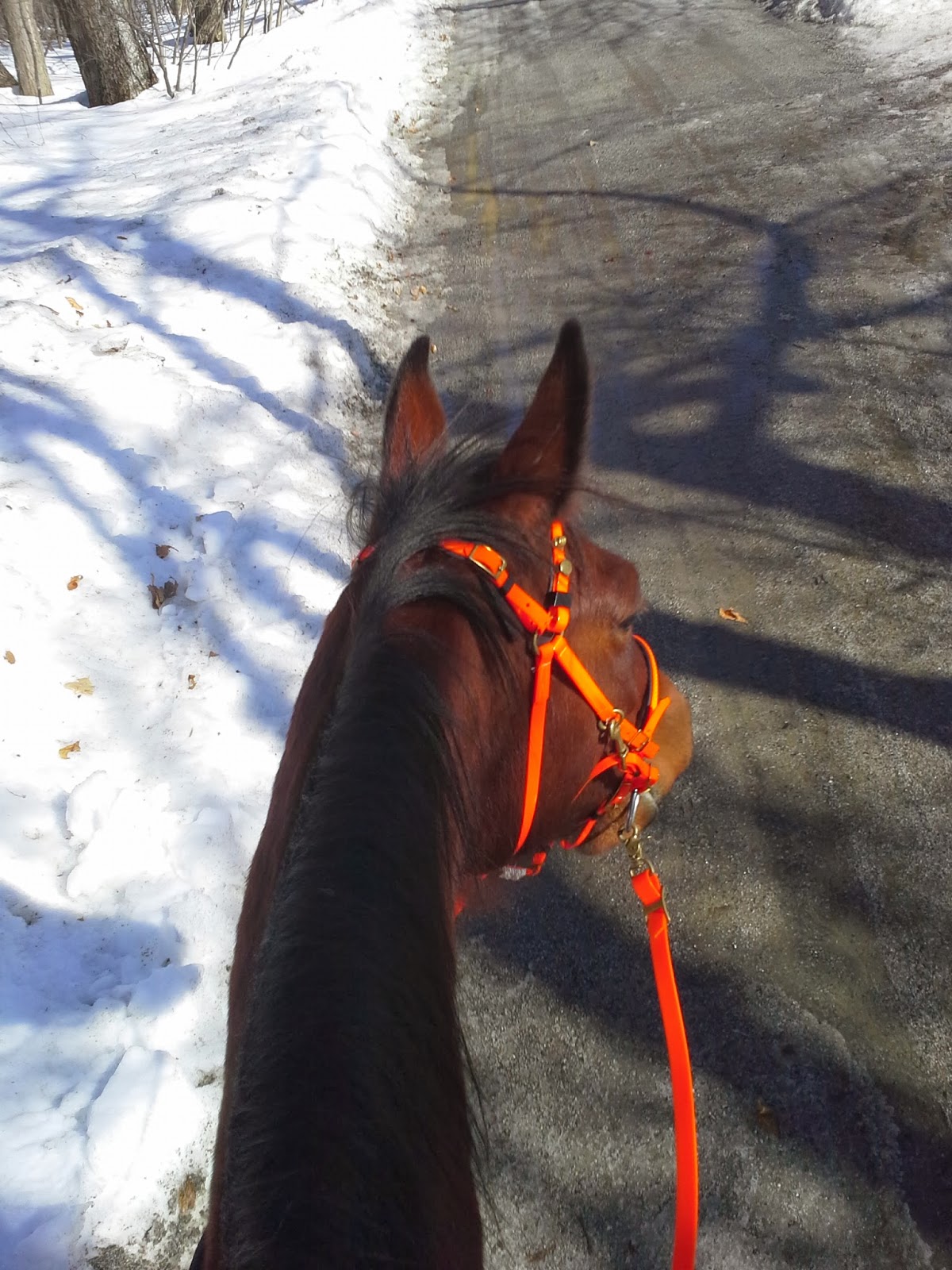 There were puddles from all the melting ice and snow and a steady blustering wind that rushed through the trees which could have been problem areas but Rori was fine through it all. Part of our route cut through an open grass field on the farm property that was still laden with crisp snow which she gamely plunged into at first but looked back at me as if to question my sanity why we were struggling through snow drifts when there was a nicely plowed tractor path running right alongside. I acquiesced with a laugh and we finished the rest of the trail on friendlier footing. Halfway through our ride, we passed by two boarders hand walking their horses on the trail, Rori stood nice and still while we exchanged introductions and she got complimented too. It was quite well deserved, according to the GPS we walked 2.1 miles in about 40 minutes. We have a ways to go by CTR standards but more importantly, I was happy and I think Rori enjoyed it as well. 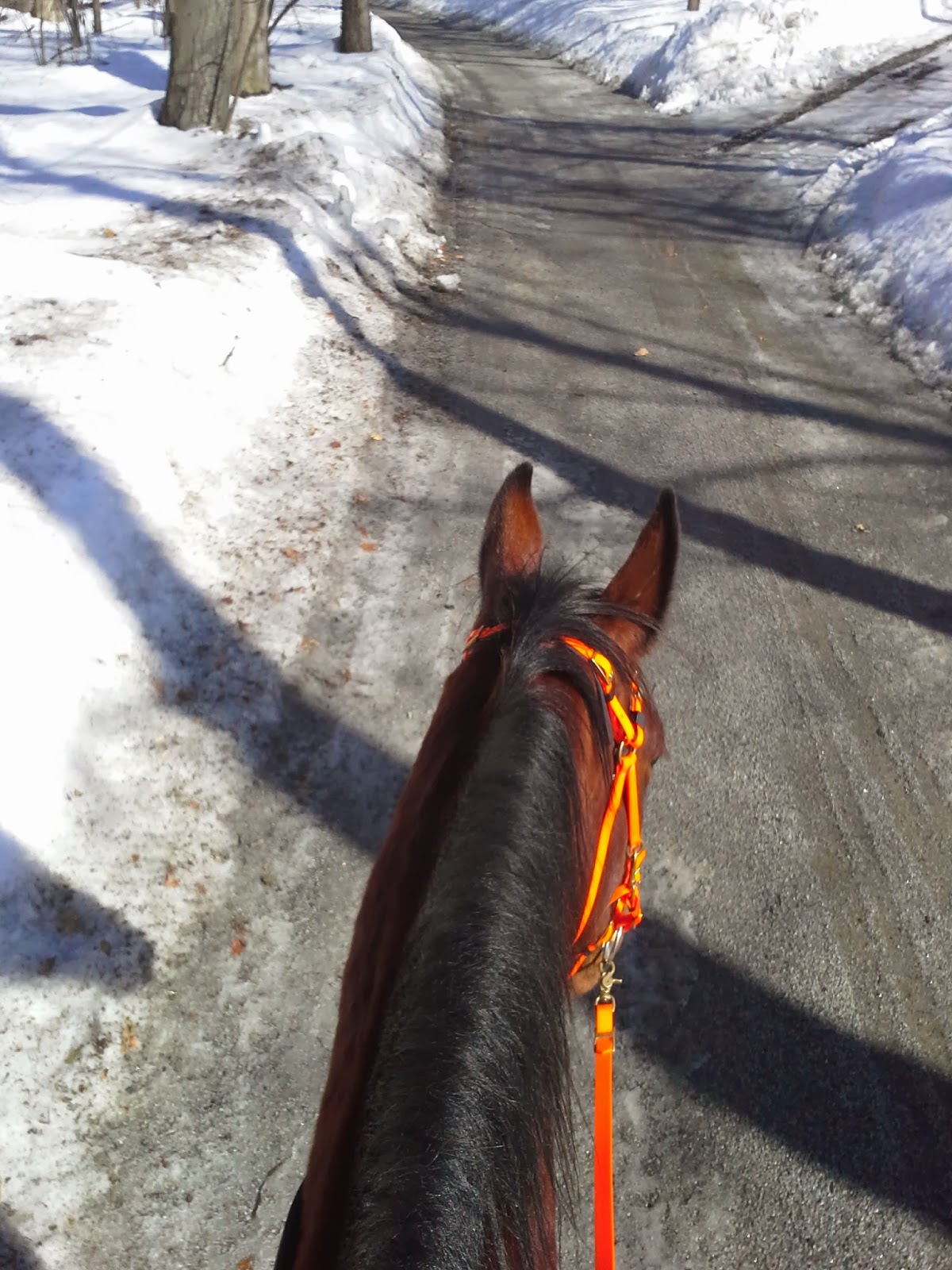 Rori and I braved the snow and ice last night and were well rewarded with a great ride. Her pasture gate was snowed in so I had to jump and stomp to break through the crust of snow and flatten it for enough clearance to swing open; I kept an eye on Rori to make sure my hopping around like some angry crazy person on the end of the lead line wasn’t completely freaking her out….NBD, cool as can be.

We first worked on standing still while mounting up. Miss Aurora walked off on me the last ride so this was something I made a point of tackling this time around. A few tries and 5 minutes later, we got it and for the final test she stood stock still as I “messily” clambered/mounted up. After a nice warm up in the indoor, we did a good solid 15 minutes of trotting with walk breaks in between and finished off the night with groundwork basics. Little improvements here and there- I’m doing much better with my diagonals and transitions. There were certain points during the trotting session that I felt more in tune with Rori than ever before- like her legs were mine sort of deal, it was an amazing feeling.

So far this half-lease setup has been working out well. I think the day/days in between rides give me time to think and reflect while letting my body recoup from the new routine (…I’ve been more fit in the past). I haven’t been around in the equestrian world for very long (3 months to be exact) but I know horse people being the passionate bunch that we are, can have huge differences in opinion about lots of things but good riding is good riding. Doing this practice ride video thing is really helping me see what things look like from the ground and find things to slowly improve and work on during our upcoming rides.
Posted by Grace at 9:40 AM No comments:

The snow and ice is doing a number here in New Jersey this week- I feel rather lucky that I managed to get out to the barn last night for my first solo practice ride with Rori. It was cold but not frigid (around mid 30s) making for decent indoor riding temperatures. My plan was to take things slow and mostly observe how Rori behaved with me without C around. Things started off without a hitch- I caught her in pasture, groomed and tacked up and we headed out to the indoor which was located a ways down the road from the barn. Despite the cold, I was still able to enjoy how beautiful and quiet the surrounding night was- it was just simply blissful. I live in a more populous area so being out in the “rural” parts of suburbia is always a treat for me. When we got within eyeshot of the arena, I noticed that the main entry door was closed. I looked around for a handle, door latch or something but instead found a keypad and realized with a slightly sinking feeling that I was never given the access code. I had my phone on me though and texted C for the code.

While I waited to hear back from her, I searched around to see if I could open the door from any other means.  It was getting colder for both Rori and me- I didn’t want to spend too much more time outside. There was a wood ramp that led up into a door way that looked promising but it was designed for human-use only. Making sure I tied Rori up securely, I ventured inside and quickly located the lights but still no switch for the arena door. I glanced out the window to make sure Rori wasn’t getting into trouble and found her amusing herself by nosing off all the snow on the ramp’s handrails. I didn’t want to leave her outside by herself for much longer though so I took one last look before heading back out.  When I opened the door, I found Rori halfway up the wooden snow-covered ramp at the end of her lead- apparently she tried to follow me inside, probably wondering where I had disappeared off to and leaving her behind! I couldn’t help but laugh as I backed her up off of the ramp, feeling oddly touched by her behavior. This mare is really quite something.

We did finally get the code and had great first ride working on the basics: transitions, walk, trot, and bending in both directions. I managed to get some video of the ride with my GoPro which I’ll post later…when I figure out how to convert the files and compress it into something more manageable for uploading. 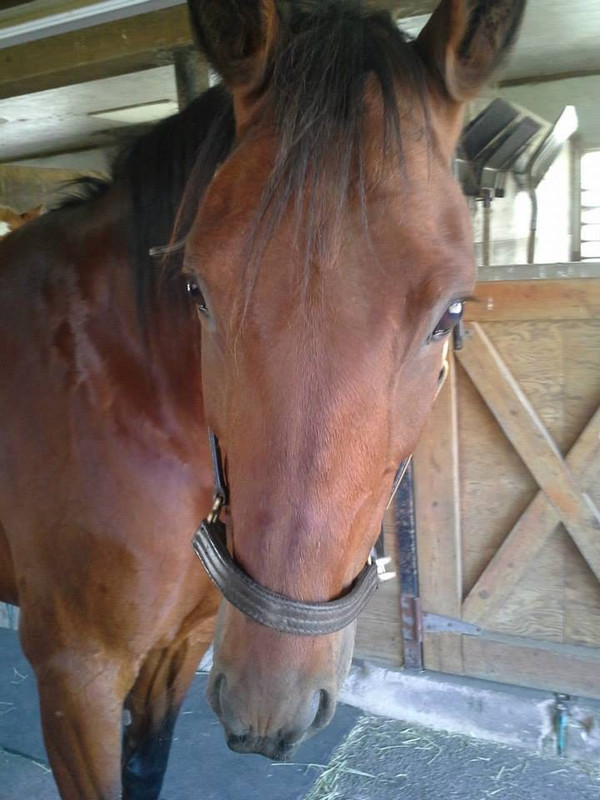 I went out to see Rori after my morning lesson and hung out with her in the pasture for awhile.

She was very easy to catch this time around gave her quiet pets and scratches with the lead line around her neck. I was meeting C for a lesson so I got her groomed and tacked up. We got her fitted with the biothane headstall and reins I bought from someone in a FB endurance tack exchange community and it worked out very nicely. I've got a nice used Zilco breastplate coming in so the set will be somewhat complete in the next few weeks. We did some trails around the property and asides from being a little looky, Rori did well despite the fact she had not been worked with since the last time I got on her. The lease starts this month so I’m excited to spend more time with her. We totally had an aww moment together when she lowered her head and shut her eyes while I groomed her face. She looked so happy and relaxed, I love little moments like that. 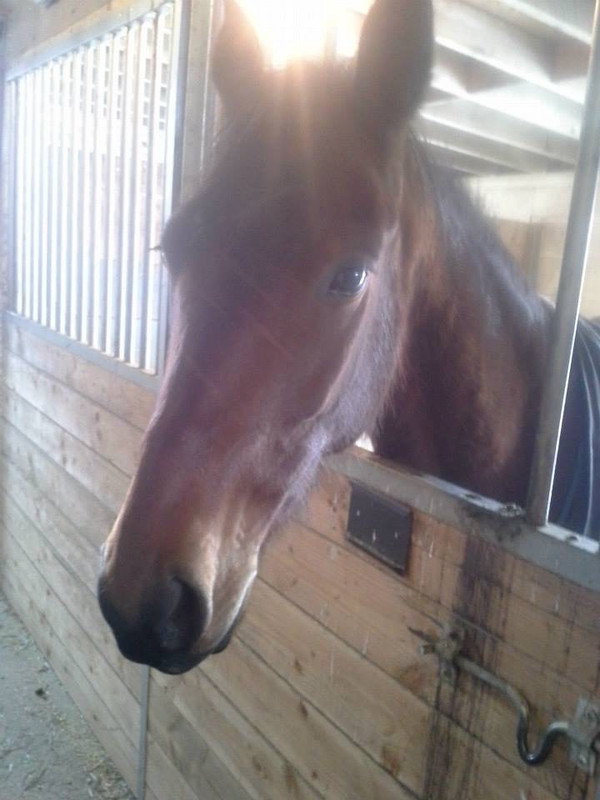