Quest continues to impress. My rough plan for last night was to do more groundwork and toss a saddle blanket on her couple times to see how she fared. Well, we ended up doing more than that.

Mareface was quite happy, bright eyed and alert to see me when I got to the barn. The BO's wife met us while we made our way to the main barn to give me her registration, Coggins, and bill of sale. I know my ownership started a month ago but for some strange reason, the act of finally getting her papers, holding them in my hand, made it feel like she was really officially mine. 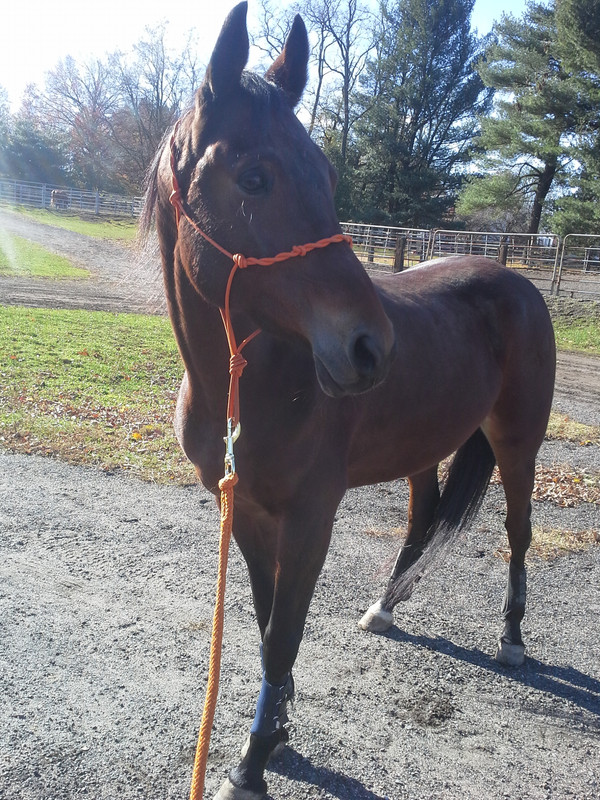 I wanted to give her a thorough grooming and check out her body condition before anything else so she got stuck in the cross-ties. She was SO much better this time. A little wiggling at first but after a couple of reminders to stand, she indeed stood like a lady.

I took the opportunity while grooming to run my hands all over her. She could have had a mild case of rain rot in the past that healed up because when I started to curry and brush, lots of flakey dust came up and I was able to feel some build up in areas behind her elbow and neck. It could just be lack of routine grooming though- I want to assume the latter. Her hooves are solid but are in much need of a trim, quite evident from contracted heels. The chip in her LH isn't bothering her mobility-wise but I want to get that addressed sooner rather than later so she's due to get them done professionally early next week. I still want to learn how to trim but for the first couple sessions I'm calling in an expert and will do the in-between maintenance myself.

She was so well behaved that I decided to see how she'd fare with saddle pad and saddle. While I had the DeSoto and SS on hand, I stumbled on an used Thorowgood Maxam online offered at a price that I couldn't pass up. I figured I didn't have anything to lose by at least giving it a try as a starter saddle. It also came with Compositi strirrups, cages, webbers, and a nice shaped dressage pad so if worse came to worse and the saddle didn't fit, I at least got some tack that I needed.

I got out the saddle and after letting her check it out first, I placed it on her back- checked the fit, checked her for discomfort. I put it on and took it off several times, making sure she was totally okay with it. Quest turned her head to look at me, maybe wondering why I couldn't make up my mind if I wanted it on or off! Other than that, she was totally chill. I threw on a saddle pad and placed the saddle on top. She could have cared less. How would she handle me girthing her up? I watched to see if she would swing her head to bite or pin her ears. All she did was flick an ear in my direction. Okay, I LOVE this mare.

I wanted Quest to get a chance to see indoor/outdoor arena while it was dark out so we did some groundwork while my friend A was riding. I decide to keep the saddle girthed up on her for observation. Quest was a bit distracted, granted new arena conditions and Smokey was still new to her, she listened to me decently enough. After A left, I decided to do some lunging and...holy wow, smooth trot is smooooooth! It took so much self-control to not hop on her right then and there.

The entire night my friends kept commenting how lucky I got with Quest and how lucky she was that I was the one who picked her up. All things considered, I'm thrilled with her so far. Yes there is still a part of me waiting to find out why she was dumped at that auction. Sometimes perfectly great horses do end up there at no fault of their own. And so far Quest has exceeded everyone's expectations- She was quite a little fireball when she arrived but she settled down so well in just a week. My friend T was shocked how great she was for me last night. I really did get quite lucky.

Email ThisBlogThis!Share to TwitterShare to FacebookShare to Pinterest
Labels: Quest

I finally got to meet my horse yesterday, exactly a month since I bought her. 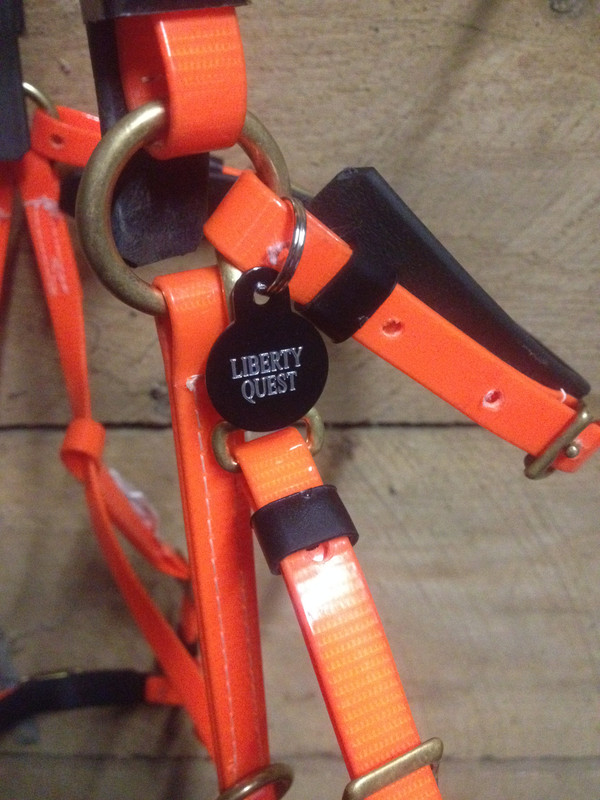 Quest got moved to the barn last week while I was on vacation with my family. My friends kept an eye on things while I was away and turned her out in the round pen for some exercise but didn't do much with her other than that. So I set out yesterday after work to finally meet my girl, still not exactly sure of what I would find but hoping for the best.

When I arrived at the barn, I finally allowed myself to feel the rush of excitement I had been trying to keep down all day long. Lead line in hand, I walked up to Quest's stall and was immediately greeted by dainty muzzle and expressive doe-like eyes. She breathed me in and I said hello in turn, talking quietly and softly as the biggest smile spread over my face. I worked the latch open on her stall door and stepped inside. Quest politely backed up to make room for me and I scratched her neck as I fastened the lead line and walked outside to see her in better light. Everything about Quest screams Arab. Her size is best described as petite but she is SO solidly built.

Asides from turnout and her stall, she didn't get much of a chance to see the rest of facility so we went on a small tour. We first checked out the indoor/outdoor arena which gave me a chance to see how she reacts to new environments with me by her side. I was glad to see that she is curious but not fearful. I showed her the corners, the sticky parts by the fences outside- she took all in stride and moved on without a second hesitation. Since we had more room to work, we did some simple groundwork- yield at the hunches, backing up, whoa, etc. The latter needs some work but the basics are definitely there. My friends who were watching the entire time commented that she tracks beautifully. Next we went out to the round pen so I could see her move at liberty. She was much more interested in hanging out with the neighbors' horses than running around but when she did move, it was with athletic grace. It started to get dark so the last thing of the day was cross-ties. Quest had never been in the main barn before and she behaved reasonably well. I did have quite the time re-instilling in her how to stand still in the cross ties (someone was very interested in showing the geldings in the stalls on either side that she was a pretty lady...) but we finally got it.

I was able to groom her and even pick up feet, and omg she's got such SOLID barefoot hooves. She has a chip in her LH which can be addressed in a couple of trims. It'll be something for me to learn and observe.

Still need to evaluate how she is undersaddle of course but wow, I can't be more pleased with how lucky I got with her. While I wait for my saddle to arrive, it's going to be ground work and lots of handwalking. So much to learn, I can't wait.