This past weekend Quest and I enjoyed a lovely reunion with the trails we left behind nearly 4 years ago. My husband had a virtual meeting in the morning and was wonderful enough to watch Caleb while I got some sorely needed, undivided barn time. 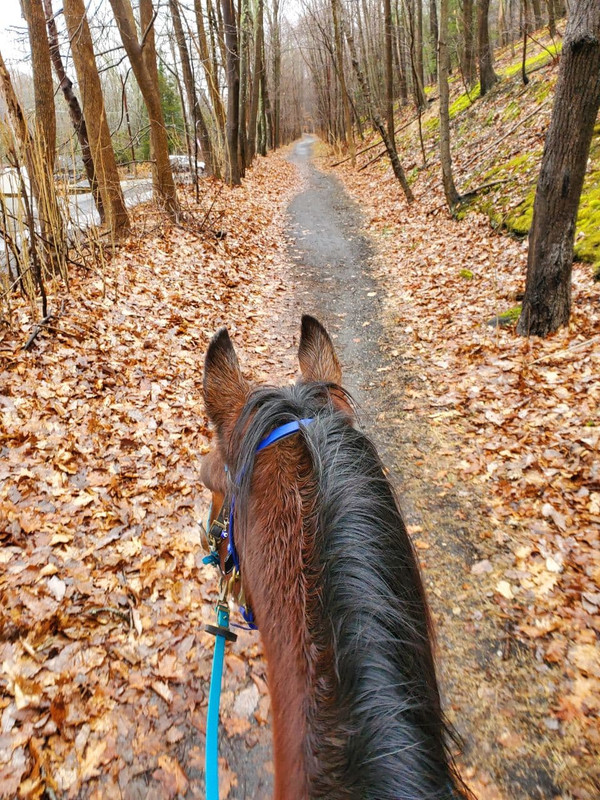 For readers with eagle eyes, the bridle and rein setup probably looks quite familiar. Earlier last year, my good friend Nicole was looking to part with some tack she was no longer using. Coincidentally at the time, I had been keeping an eye out for a tack set for my husband. I reached out to Nicole and she gave me not only the tack but also an Orthoflex saddle that her husband had used. I nearly cried happy tears at her incredible generosity towards my family.

Sadly due to the timing of my pregnancy, hopping on Quest to try out the saddle and tack had to wait a few months longer. The wait was SO hard. I had heard tons of good things about how comfortable Orthoflex saddles are and was impatient to see what the rage was all about. I did have my husband help bring the saddle out to the barn shortly after it arrived so that I could get everything fitted and sized for Quest.

This past weekend, I finally had the opportunity to get the full setup together and hop aboard. Before we hit the trails though, I wanted to see how Quest fared with the new tack in an arena/somewhat contained space. It had been raining on and off all morning so the small indoor was feeling pretty crowded with a lesson that the BO was doing with a student and a boarder who was riding bareback. Despite the buzz of activity around her, mareface did fine- we did a few laps of walk and trot with no issues at all. The rain was starting to let up just when another boarder showed up to use the indoor, so I decided that it was time for us to head on out.

Quest was all business from the moment I pointed her towards the pasture path that led to the trail head, asking me to let her trot. The less than ideal weather kept most of the normal trail users at home so as soon as we hit the trails, I let her open up and we flew along at all gaits, unhindered the entire time. True to all the things said about it, the Orthoflex was amazing. It felt secure and we had no issues with slipping. I definitely could feel the rust coming off both of us as I got back to using old riding muscles, remembering to change trot diagonals and cuing for canter on both leads.

Gliding along the open trails, I was able to take my first deep breaths in what felt like forever. We ended up doing about 4 miles in less than an hour and mareface felt game for more. I really missed her, riding, just everything about this lifestyle so much.

Back in the Saddle

The long awaited moment finally happened this weekend. Quest and I did our first real ride after nearly 10 months and it was the perfect way to start the new year. 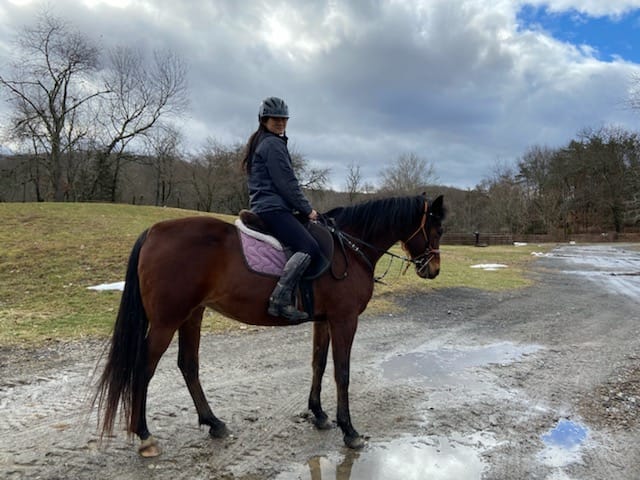 W was wonderful enough to watch C in the car while I did my ride without worrying. He really is the best husband. The extent that he understands how much riding and my ride goals mean makes me so grateful for his complete support <3

Mareface was foot perfect and awesome. We did about 30-40 minutes of walk-only since I'm still healing from the incision and didn't want to do anything that would set my progress back. I felt great though and it was tough not to keep going or be tempted to do more than just a walk. Quest was definitely feeling good as well and she asked politely to trot at a few points during our little jaunt.

I guess it was a good thing I didn't do too much since I felt a little sore later that evening- definitely need to build up those riding muscles again haha If the weather stays decent, I'll probably be going out to the barn most weekends and might try to fit in a longer trail ride at some point!