1. For having a job to continue to afford riding and horse ownership
2. For remaining healthy and physically capable to ride
3. For my non-horsey family becoming slowly more accepting of my horsey-ways
4. For having the opportunity to train and compete my own horse in our first CTR
5. For learning a difficult, yet valuable lesson in patience...some things just take a LOT of time
6. For good friends willing to let me borrow their ponies when I needed saddle time
7. For finding and moving into a new barn with exactly what Quest and I need right now
8. For my adventure mare returning back to 100% soundness
9. (Not as grateful) for moody mare tantrums and jiggy antics...but if you don't have some bad days, you can't appreciate the good days
10. For having a horse partner willing to go the distance and eager to explore trails solo with me
11. For a mare willing to forgive my mistakes yet demands my headspace in the here and now to be a better rider, a better leader
12. For the chance to dream and scheme about distance riding again 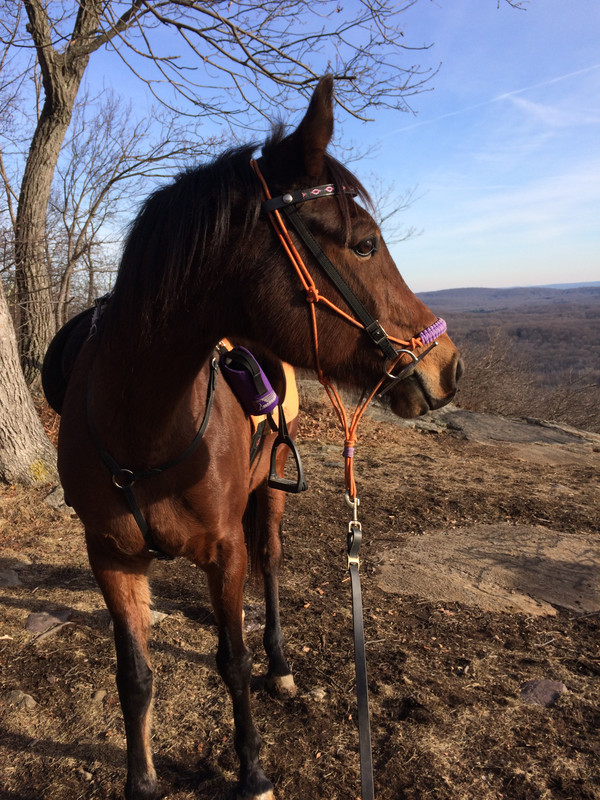 JA and I chatted about meeting up for a long ride since Day 1 when I moved in and we finally got it done this past weekend. I had just spent an entire week on the road for work and was really looking forward to being back in NJ and kicking off my birthday weekend celebrations with a low-key trail ride. Our destination for the ride was Hawk Watch, a popular spot for…well, hawk watching. JA was eager to show me the trails and claimed the views were well worth the long ride over. Quest and I need long slow distance. It was a good plan. 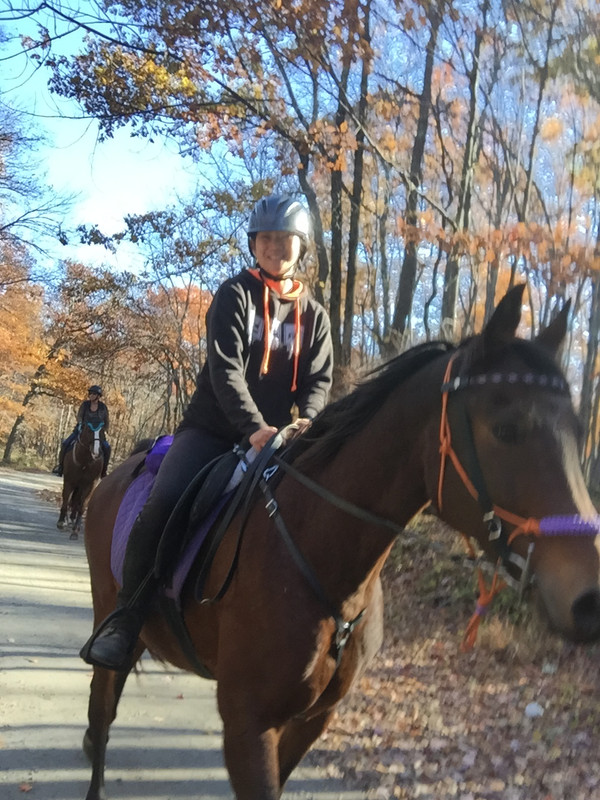 Originally it was supposed to be just the two of us, but last minute I found out that there were four other riders who wanted to join our outing. I didn’t think much of it at first since Quest has never had huge issues with new horses apart from making angrymare ears from time to time (probably a huge reason why she failed at being a western pleasure show horse).

The ride to Hawk Watch was uneventful and our group kept a walk-only pace. Quest and Lucy were the fastest walkers in the group and so we took turns leading the way. I was really impressed that despite the fact mareface is the newest horse at the barn and was totally new to the trails we covered, she had zero issues leading the group a good 60% of the time that entire day. Of course she still spooks from time to time when she spots something that takes her by surprise but they are shudder-in-place spooks- The stuff I can deal with.

We took our time, enjoying the perfect fall weather, laughing, taking pictures and eventually arrived at our destination. True to JA’s claim, the view was absolutely breathtaking.

I wish we could have spent more time there but the great weather enticed a lot of hikers and birdwatchers out of the woodwork. The small area started getting crowded rather quickly and I could sense Quest’s nerves getting amped up. I mounted back up and we walked a little distance into the woods working on trail skills to keep her mind busy on me while we waited for the rest of the group to rejoin. While heading back M, one of the ladies in the group, said she knew of a trail that was “easy, flat, level and safe” that would still take us back home. Since we didn’t know the way to this new trail, JA and I let her horse and everyone else take the lead and we continued on our way. M led us down a section of trail that opened up into a grass path running alongside a small lake. The view was very pretty and I was just thinking to grab my phone for a picture when M suddenly, without warning, took off at a canter with the rest of the group hot on her heels. JA and a girl named S hung back but Quest was not happy about the sudden rapid departure of her other trail buddies and started jigging to try and catch up.

Though Quest was keeping to the trail and not hauling on my hands, the trail was also NOT flat or level as M said it was. I really didn’t want to risk injury to anyone and decided it was safer to dismount and work Quest from the ground to get her brain back on me. It took about 10 minutes (which felt like an eternity) but after firm reminders of the emergency stop to chill and stand, we walked back out to the parking lot and I was able to mount back up. After discussion, we decided to go back the way we came and not risk doing M's suggested route.

The three other riders eventually figured out we had stopped but decided to not to wait and headed back home without JA, S, and me. In the end, it was much better that our group had split up because Quest was much better without the other horses around her. She even led the way home a few times and we returned back to barn sane and quiet as we had left.

While no one was hurt and everyone was fine in the end, I can’t help but be annoyed by the lack of consideration the other riders exhibited- especially when JA and I both went into the ride telling everyone we were doing walk-only. It's been awhile since I did a large group ride and maybe I took some things for granted.

This experience does remind me that I need to continue working on Quest’s “stand and wait” on the trail.  It’s been her weakness from the beginning and I really should be addressing that more proactively. She does it just fine in an arena where there is no stimuli around her whatsoever so this will have to be a "on the trail" training thing. We did lose almost a year to her injury though so naturally trail training things have been on the backburner. I’m not fazed by the setback though; it just means we have to just go out more. We’ll get better with time and practice.

Since I started riding three years ago, I've always wanted to be part of a barn community that actually DID fun things together- Not just talk and plan, but actually follow through and do the fun thing. I'm an introvert by nature so nothing will ever replace the satisfaction and contentment I get from hitting the trail solo but I won't ever deny or turn away the opportunity to enjoy horses in like-minded company. 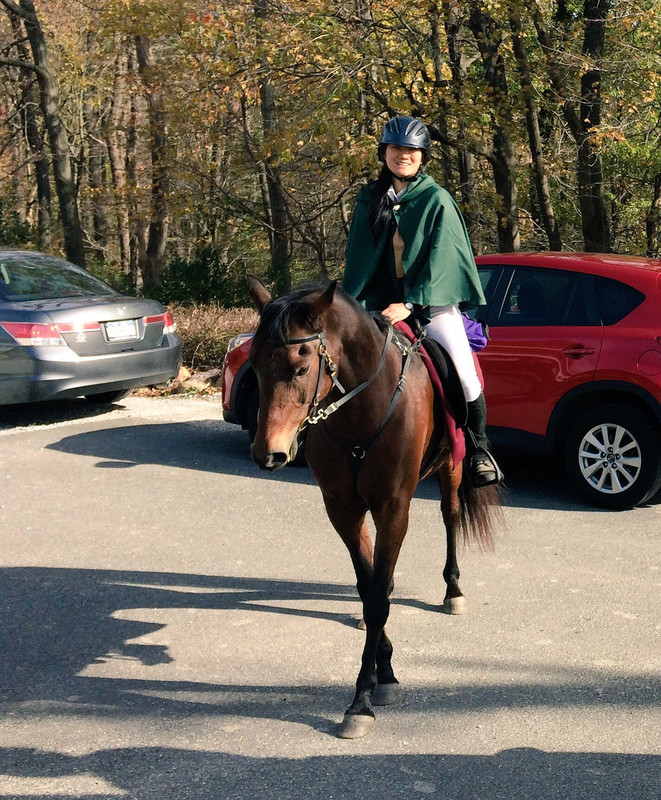 This past weekend the BO and his daughter hosted a fun scavenger hunt pace at the barn to celebrate Halloween/Thanksgiving/autumn. The event was very low key and since the pace time was based on a slow walk, I was comfortable that it was safe to participate with Quest.

We partnered up with JA and Lucy and both agreed beforehand that we would ride in costumes (which was highly encouraged). The night before the pace, everyone got emailed the instructions and ride order. To our bemusement, JA and I were assigned to go first at 9AM- it was a little curious why the two newest boarders (JA had arrived in March) were given the earliest start time. Maybe because of the fact we had the highest chance of getting lost and sending everyone else off on the wrong track? lol


Despite our newbie-ness, JA and I worked really well together. Quest and Lucy got along fine and paced each other nicely. We found all of the clues and only one of the riddles completely stumped us at first- we eventually puzzled it out after a detour but the confusion cost us too much time in the end. To be honest I wasn't too bummed since all I really cared about was having a good, safe time with my mareface in our first "competition" since her injury.

The scavenger hunt put Quest on new trails that we had not yet had a chance to explore together and the mare was rock solid. She didn't even pause at the scary things that apparently spooked other horses (who have been at the barn longer than she has) that day. At one point during the pace, we were passed by a horse on the trail jigging to get back to the barn- Quest paid him no mind and plodded along on a loose rein minding her own business.

OF is certainly no WSS but for now, we will make do with what we have and take our time with lots of long slow distance walking. JA knows of a lot more places to ride and is more than happy to show me the trails. I'm excited to see what other things the new barn has to offer (:
Posted by Grace C at 6:15 PM 10 comments: