Quest turned 13 this past Friday! We didn't really get a chance to celebrate properly last year since I couldn't do a 2 hour round trip after work during the middle of the week. I planned to amend that this year but a huge summer thunderstorm rolled in that night so the mare's birthday party got pushed to the next day. 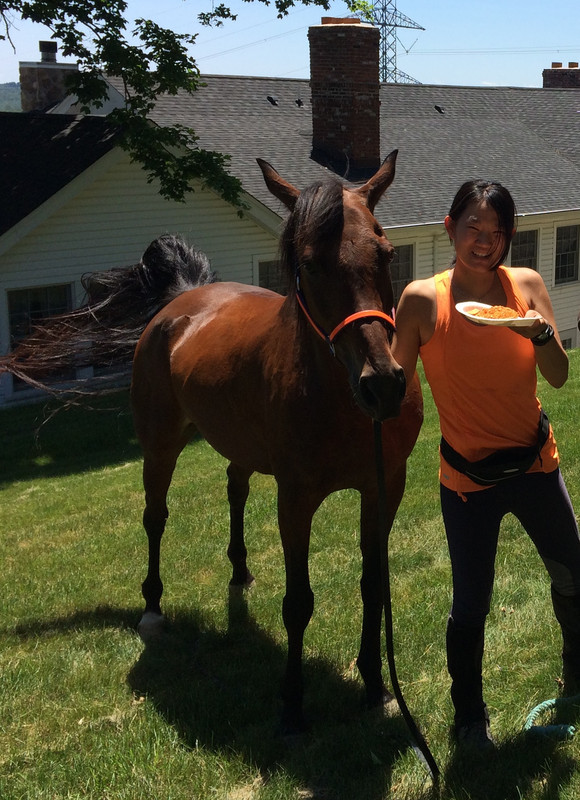 Sometimes things happen for the better though. After the stormy night, the weather cleared up and was absolutely beautiful in the morning. Instead of doing the indoor arena session I had planned, Quest and I set off on a quick easy trail ride and threw in a couple of hill sprints just for kicks because I knew mareface liked to go fast.

After our short trail ride, we picked up A and Mel from the main arena and headed down to the lower arena to play party games. We have always done barrels on Quest's birthday and this year was no exception.

Two cavaletti blocks and a jump standard served handily as the barrels. A bit ghetto but it got the job done! 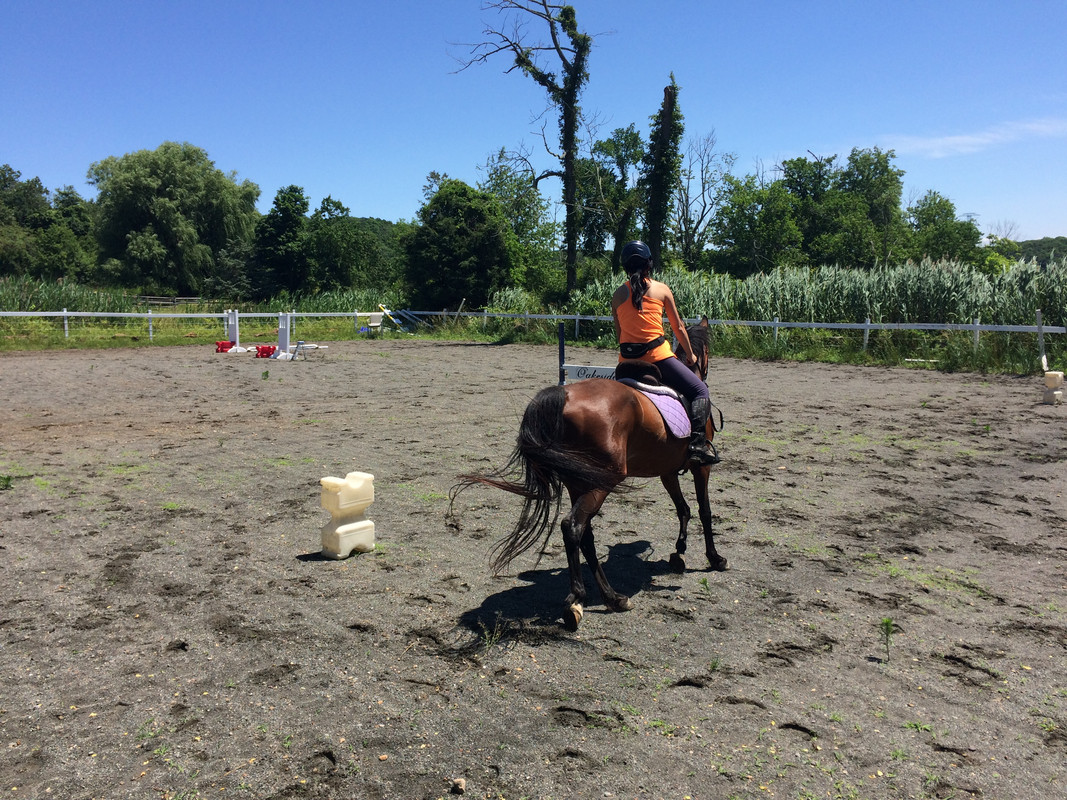 Both Quest and Mel got to run several times before we called it a day. Everyone headed back to the barn and mareface finally got her birthday cake! I whipped it up this morning before I left for the barn. I have been using the same recipe since Rori-days and it's always been a hit.

The timing of her birthday couldn't have been more perfect since this weekend is our last "vacation day". We are now T-minus 3 months to our first ever endurance event so we have to get back to training and getting that mileage in. There is so much that needs to be done before then- I'm excited yet nervous.
Posted by Grace C at 9:32 AM 6 comments:

I was away last week in Texas on a business trip and made up for lost time seeing Quest pretty much every day this weekend. I think she may be sick of me by now haha 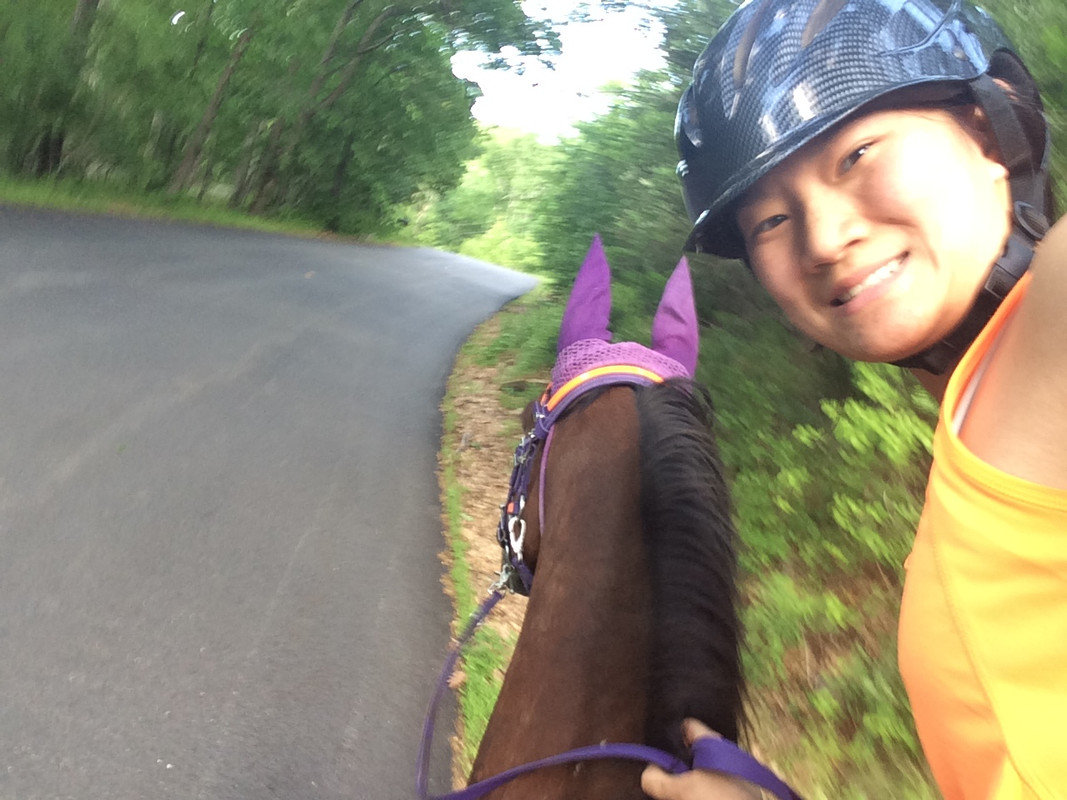 I arrived home Friday afternoon with plenty of time to hit the trails solo for a longer and faster ride. We got in a solid 10 miles using the rail trail I found recently and Quest was booted all around so we flew across the rougher terrain with ease. I've been gradually allowing her to move out on the single track wooded trails if she chooses to do so. It never ceases to amaze me how surefooted she is and I love feeling that power as she surges up hills.

The weekend forecast called for white hot temperatures and high humidity so I decided to hit the barn as early as possible to avoid the heat. Quest and I stayed in the indoor and we finally got to play with baby jumps again! After our first successful foray together, I've been itching to do another jump session but I intentionally held off until we had ample arena space. With summer right around the corner, a lot of boarders have come out of the woodwork for rides and lessons. I don't mind sharing the arena with other people but when I'm trying something new with my horse, I like having just-in-case space for stupid to happen.

Fortunately nothing bad happened and we had a great session in fact!

We started off on the red and white cavaletti set with only one end propped up, essentially making half a crossrail. The plan was to use the entire length of the pole- starting with the lower end and eventually aiming our jump to the higher end to work up to the height of the black and white cavaletti. 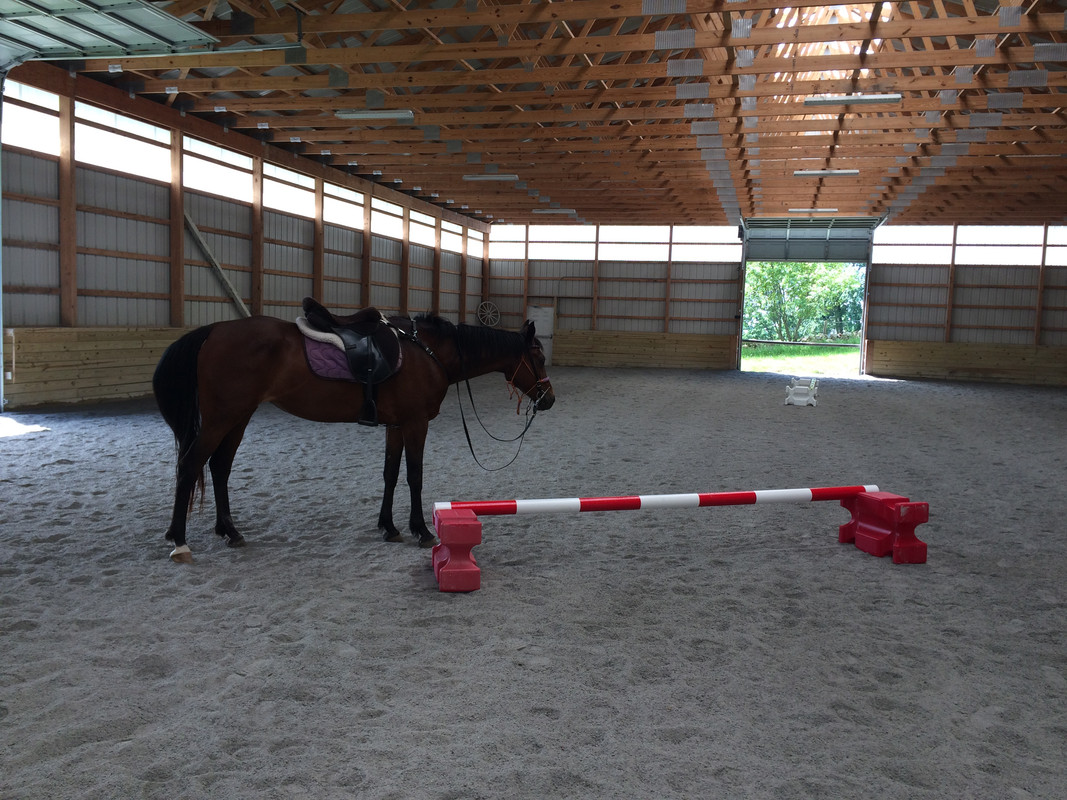 The setup actually worked out really well. It was a good mental check for Quest to think and not just throw herself over an obstacle and it forced me to be precise in directing us over specific area of the pole to achieve the desired height. Quest definitely balked at first but got over her angst pretty quickly when she figured out the game. I wanted to keep the entire thing as "unexciting" as possible so we stuck with a working trot. If she cantered off, I brought her back to a trot easily.  We also took walk breaks throughout the session and those worked well to keep everything fun.

We thoroughly schooled the red cavaletti in both directions and moved onto the black set at full height. Quest balked again but eventually figured out this was the same thing as before. After working that in both directions, it was time to tackle our final goal of the day- stringing together the two jumps at height into a mini course. We did it twice consecutively, alternating the jump order and direction each time. Quest was simply awesome.

Overall I am super pleased with how well the session went. I had my GoPro set up to record the entire thing and reviewing video has been immensely helpful for immediate feedback and things to improve next time.

Quest's first attempts were definitely disjointed- mostly straight up and over which nearly unseated me lol But from the video, I can see we both settled into a rhythm and that mareface really enjoyed herself too- so much that she started to really lock on and pull me towards the jump. I noticed that we tend to drift a little to the right so I need be mindful and support us more to get us straight down the middle.

As for riding posture...first, I need to SHORTEN MY DARN STIRRUPS. Once again, I forgot to adjust from my regular trail length and I'm sure that attributed to some not so pretty riding.  Also I might be putting myself a too far forward when two-pointing. It's erring on the side of caution so I don't get left behind or yank her mouth but I do sometimes pitch forward when we land. I've found a few exercises that will address that though so that's our assignment whenever next time we get a chance to jump. I'm hoping that as I get more comfortable and confident, the improvement in my position will happen as well as long as I keep the foundations in mind...and remember to shorten my stirrups!
Posted by Grace C at 11:49 AM 8 comments: